Demonstrators have gathered in the Georgian capital Tbilisi in support of Afghan Mukhtarli, the exiled journalist who was taken by unknown persons to Azerbaijan where he is now on trial. His wife Leyla Mustayeva joined the rally and stressed that he did not go willingly:

“I am holding his passport right here. Can the Georgian authorities please explain how a man crossed an international border with no identification documents on him?

Ms Mustayeva, who is also an Azeri journalist exiled to Georgia, had applied for a visa to take up ECPMF’s offer of a refuge under its Journalists in Residence Programme. But the German authorities rejected the application. 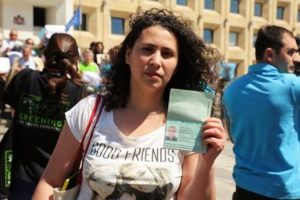 She told the ECPMF: “He was a journalist investigating corruption in the ruling Aliyev family in Azerbaijan. He was not a criminal. They just delivered him to another undemocratic, authoritarian regime that does not care about its people.”

Now her husband faces charges of trying to enter Azerbaijan illegally, resisting a customs officer and carrying contraband, namely 10,000 euros in cash. At the court in the capital Baku, he waved to his supporters who had gathered outside. But Mr Mukhtarli has been ordered to remain in pre-trial detention for three months.

ECPMF Board Chair Henrik Kaufholz has won widespread backing in the European media freedom community for his strongly-worded statement condemning these actions.

And the Council of Europe’s Commissioner for Human Rights raised a new concern: that the detained journalist might be mistreated during his time behind bars.

“Azerbaijan’s authorities must release Mr. Mukhtarli without delay and ensure that he fully enjoys his human rights, including the protection from torture and ill treatment.”

At a press conference in Tbilisi, Georgia’s Minister for Internal Affairs Giorgi Mgebrishvili promised an investigation. But Leyla Musteyava doubts that they are serious.

“They are pretending to investigate,” she said. “They have not checked the CCTV cameras.”

Noting that the European Union recently liberalised access for travellers from Georgia to EU member states, so that they no longer need a visa for stays of up to 90 days, Ms Musteyeva further stated: “This is a big shame for a land that wants a visa-free regime. They only imitate democracy in Georgia.”

The cameras of Meydan TV, a network of exiled Azeri journalists, captured the protest in Tblisi. Meydan TV’s editor Emin Milli comments: “Afghan Mukhtarli told his lawyers that the people who kidnapped him looked like people working for the Georgian security services. It is impossible to kidnap someone in the centre of Tbilisi and deliver that person to Azerbaijan without the participation of the Georgian security services.”

He adds: “This is not the path to the EU. This is a clear path back to the Soviet Union. The Georgian state has betrayed the rule of law and I hope that the Georgian people will stand up and demand justice.”