First launched in 2018, the IJ4EU fund aims to strengthen the watchdog role of investigative journalism in Europe. Its focus on supporting cross-border projects acknowledges the increasingly transnational nature of public-interest stories. In 2018, the fund provided 350,000 euros to 12 projects on a diverse range of topics, including corruption, migration, climate change, and artificial intelligence, several of which received awards. The grantees also included The Daphne Project, which continued the work of murdered Maltese journalist Daphne Caruana Galizia.

In 2020, the much larger fund will grant approximately 800,000 euros to new cross-border projects (including those in early stages of development or new phases of existing projects)  through two calls for proposals (“Investigation Support”). The first call is expected to be launched in mid-April, after which teams of journalists will have around six weeks to submit proposals. A second call will be launched in late summer 2020. In addition, approximately 200,000 euros will be provided to ongoing projects that need funds to complete or publish their stories (“Publication Support”). These grants will be disbursed on a rolling basis from mid-April until the end of November 2020

“Investigative journalism is essential to democracy. But it needs resources. We’re thrilled to be able to continue the IJ4EU fund and provide even more support to investigative projects in Europe”, said Barbara Trionfi, executive director of the International Press Institute (IPI), the lead organisation behind the fund. “This is about helping to tell the stories that the public needs to hear.”

In addition, over 165,000 euros will be provided in the form of training, networking and legal and editorial support to the investigative projects. A further 15,000 euros will be allocated as a new monetary prize for cross-border investigative journalism, which will also be open to projects that were not funded under IJ4EU. The overall project will therefore provide nearly 1.2 million euros in direct support for cross-border investigative journalism in EU member states and candidate countries.

IJ4EU is managed by a consortium led by the Vienna-based International Press Institute (IPI), a global network of editors, media executives and leading journalists for press freedom, together with the Maastricht-based European Journalism Centre (EJC), an international non-profit that connects journalists with new ideas, skills and people through grants, events, training and media development; and the Leipzig, Germany-based European Centre for Press and Media Freedom (ECPMF), which promotes, preserves and defends media freedom by monitoring violations, providing practical support and engaging diverse stakeholders across Europe.

An independent expert jury will select the projects to be funded under the Investigation Support scheme. In 2018, the jury was led by Wolfgang Krach, editor-in-chief of Germany’s Süddeutsche Zeitung, who helped steer the Panama Papers and Paradise Papers investigations. The jury will be guided by a set of clear and transparent criteria.

The EJC’s expert team will select the projects to be funded under the Publication Support scheme in order to facilitate a rapid response. The funding process will be streamlined to allow for a decision within three weeks of the request.

Full details on the eligibility criteria for the IJ4EU grants will be announced along with the launch of the first call, expected in mid-April 2020. The details will be published on the IJ4EU website. The criteria will be similar to those of the previous IJ4EU round. For both the Investigation Support and the Publication Support funding schemes, the grants will be open to teams of journalists (staff and freelance) or media organisations based in at least two EU member states or one member state and one candidate country.

Proposed topics must be of public interest and cross-border relevance. Teams working in all types of media – including print, broadcast, online media, documentary filmmaking and multi-platform story-telling – will be considered. Proposals will need to be submitted in English, and provide a project description, publication plan and budget. Teams applying for the Investigation Support scheme will be able to request up to 50,000 euros, and may apply to one or both of the calls. Projects that are unsuccessful in the first call may also re-apply during the second call.

As was the case with the inaugural round, IJ4EU is co-funded by the European Commission as a Preparatory Action. Other donors will be announced as further partnerships are confirmed.

ECPMF and EJC welcome the project

“IJ4EU is an amazing project! Already the first round in 2018 under the crucial support of the European Commission resulted in remarkable cross-border investigations that created a truly European sphere of debate”, said Lutz Kinkel, managing director of the ECPMF. “We are delighted to award a new prize and present the work of the new grantees at the second UNCOVERED conference in Berlin in 2021. Again we will demonstrate and celebrate the significance of investigative journalism.”

“Europe’s citizens need a resilient journalism sector more than ever. Investigative journalists face challenges around safety, sustainability and learning new skills”, said Adam Thomas, director of the EJC. “The European Journalism Centre’s work with innovative storytelling, data, and press freedom will support this community through training and rapid response grants. We are delighted to join IPI and ECPMF to create a more informed European public.” 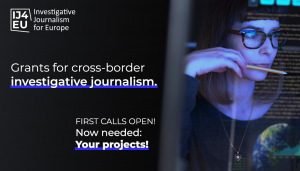