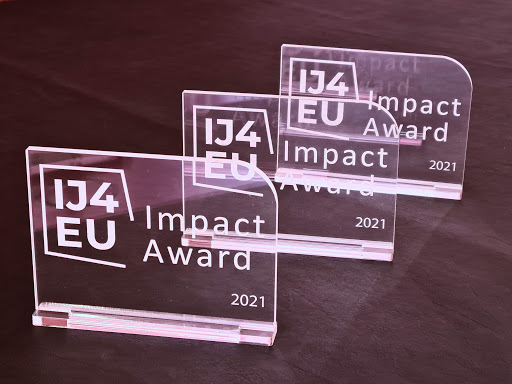 Yet the atmosphere was mostly one of celebration, with top-level speakers stressing the importance of cross-border investigative journalism and four teams collecting handsome trophies (pictured above) as well as 5,555 euros each in the first-ever Impact Award.

We have increased the budget – nearly doubling it – for Creative Europe. To support investigative journalism is one of the core tasks we should concentrate on.

Backing up this promising statement, the European Commission’s Anna Herold told the online audience of more than 300 registrants:

”We’re extremely proud of this project where full independence of the media is ensured by the arm’s length approach”.

The IJ4EU grants are provided by funds from the European Commission, administered by the European Centre for Press and Media Freedom (ECPMF) and managed by the International Press Institute (IPI).

The high point of #UNCOVERED was the prizegiving ceremony. This rewarded four cross border investigations that have resulted in criminal charges or political change or changed European society in some other important way.

Jury chair Shaun Walker, the Guardian’s central Europe correspondent, praised the high quality of all ten shortlisted projects. On the Lost in Europe project, he commented that all the jury members were both impressed and saddened. The team tracked the movements of Vietnamese children who had disappeared from refugee reception centres across Europe and been trafficked into the illicit drugs business and prostitution. Accepting the award on the line from the Netherlands, Geejse van Haran commented:

“We learned how vulnerable children are, how important our journalistic ethics are and how important cross-border working is, because the criminals don’t respect border”.

Jury member Theresa Ribeiro, High Representative for Freedom of the Media at the organisations for Security and Cooperation in Europe (OSCE), announced the prize for The Daphne Project which continued the investigations started by murdered reporter Daphne Caruana Galizia:

“(She was) the Maltese journalist who paid the highest price for her journalistic work. In times of mistrust, this work is more important than ever”.

Accepting the award on behalf of himself and the 45 journalists on the  project team, Jules Giraudat paid tribute to Daphne’s family, saying “I have a special thought tonight for sons Matthew, Paul and Andrew. They are a true inspiration.”

Day 2 of the #UNCOVERED 2021 online conference took participants behind the scenes of some of the most important stories of the decade.

The themes of collaboration and innovation ran through all the sessions and workshops, and the way the media freedom community has united to oppose SLAPPs was eloquently explained in the debate chaired by Flutura Kusari, legal advisor of the European Centre for Press and Media Freedom (ECPMF). SLAPPs are Strategic Litigation Against Public Participation – in other words, lawsuits that represent an abuse of the legal system to try to intimidate journalists and publishers or ruin them financially.

As Flutura Kusari pointed out, the ECPMF is playing a leading role in the new CASE group of organisations calling for a European Union Directive to combat SLAPPs.  It already has some support in Brussels – panel member Viola von Cramon-Taubadel MEP stressed:

”The situation is depressing, but I’m optimistic that we can achieve something.”

Swedish SLAPP victim Per Agerman described the Realtid case at the High Court in London: “In Sweden, you can only sue the editor responsible. By going to London they could bypass the Swedish constitution”.

Cross-border collaboration is clearly essential in such cases, and this is one of more than 70 which ECPMF’s Legal Support helps to fund. Through a partnership between ECPMF and the Justice for Journalists Fund (JFJ), SLAPP cases can be identified, checked, challenged and publicised, and JFJ’s Maria Ordzhonikidze joined the panel to describe their role.

Many investigations featured at #UNCOVERED tackle global themes such as environmental threats, corruption in the shipping industry (Black Trail) and in fishing (The Insatiables). So the panel on “Lessons for Europe” was a good fit, bringing insights from investigative journalists across Africa, Latin America and the Phillipines (pictured below in a screenshot from the panel) to show how cross-border collaboration works in different regions of the world. and share expertise with European colleagues.

Facing a future where data-driven journalism and digitisation are widely perceived as a threat to journalists’ jobs suddenly seemed easier for participants in the Innovation panel. It was moderated by ECPMF Executive Board Chair Yannis Kotsifos, a board member of the European Federation of Journalists. His three experts showed how new technology is enabling reporters to work with data scientists and produce ground-breaking results like the IJ4EU-funded Money to Burn exposé of Europe’s energy policies

Conference participants got an even more detailed picture of the possibilities for Artificial Intelligence in news at a workshop with data scientist Morteza Shahrezaye and freelance journalist Sylke Gruhnwald. Like the “good cop/bad cop” duo, he enthused about the ability of algorithms to search documents for stories in up to 50 languages, to find veiled Nazi symbols in Facebook posts and to write Guardian newspaper articles all by themselves with only a human proof-reader. Meanwhile she warned about the in-built race and gender bias of most datasets, the need to make algorithms transparent and accountable and the questions about employees’ rights at big tech companies such as Google.

You can watch recordings of the online #UNCOVERED conference sessions at YouTube: Day 2 and Day 1