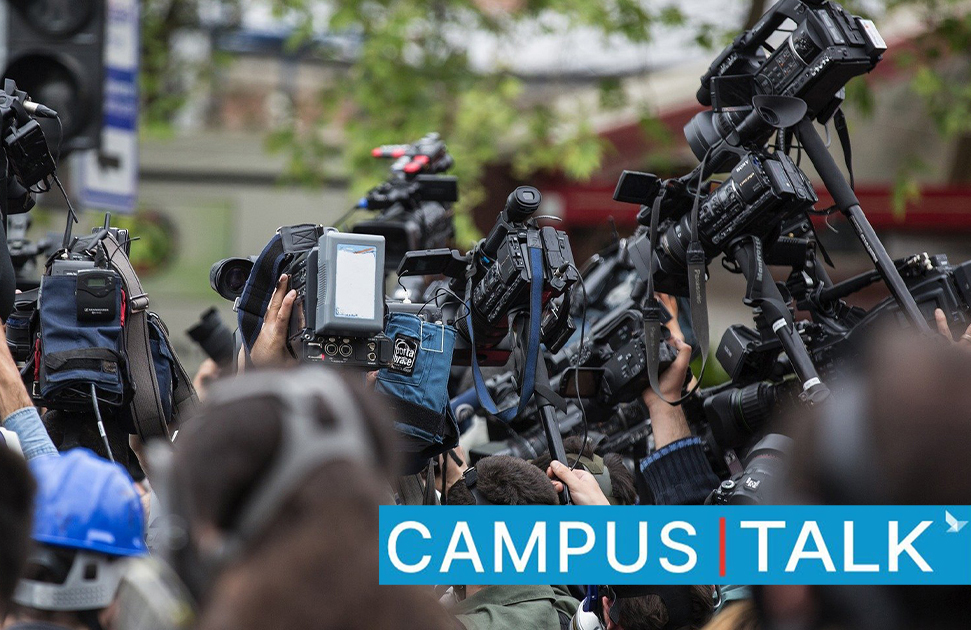 The pandemic increased threats to journalists all over Europe

In 2020 there were 69 violent attacks on journalists in Germany – and a deterioration of press freedom in Poland, Czech, Hungary and across Europe. How to proceed? The European Centre for Press and Media Freedom (ECPMF) Karola Wille, MDR-director, Adriana Rozwadowska from Gazeta Wyborcza  and Saxony’s Media Minister Oliver Schenk for a campus talk.

Poland’s Gazeta Wyborcza(GW) is a newspaper of national importance in Poland, a lighthouse of independent journalism – and, because of that, a target of the ruling PiS (Law and Justice) party. GW journalist Adriana Rozwadowska, speaker at the Campus Talk, described the larger political frame: how the government systematically dismantles democracy by undermining the judiciary and manipulating the media market. Public Service Media TVP was turned into state media, disseminating “propaganda”, as Rozwadowska called it. Lastly the state controlled oil company Orlen bought Polska Press, the leading regional publisher with more than 20 newspapers, from its former German owner Verlagsgruppe Passau. Obviously the government is trying to get hold of as many media outlets as possible to shape public opinion with regard to the elections in 2023. Is it possible these elections will be a game changer? Rozwadowska is sceptical. “If a new government gets elected then things might get a little better but we’ll still have problems”, she said. The restructuring of TVP alone would be a huge task. The loss of press freedom – this was the lesson learned – can not be easily reversed.

Germany also faces elections. After 16 years in charge, Chancellor Angela Merkel will not run for office again. The new parliament (Bundestag) is to be voted in on 24 September 2021. However, the attitude of the ruling party, the CDU, is very different from Poland’S PIS. Oliver Schenk, whose Saxonian Staatskanzlei co-ordinates the policies of all federal states governed by the conservatives, said

He was commenting on statistics quoted by ECPMF Managing Director Lutz Kinkel. They came from mappingmediafreedom.org and the “Feindbild” study on the situation of journalists in Germany. The study showed the highest number of attacks on journalists and media workers in Germany since monitoring began in 2015: no fewer than 69 violent attacks on journalists were recorded. Another grim finding from those statistics is that demonstrations and public gatherings are the most dangerous places for camera crews and journalists to work.  The figures show that 71 % of assaults on media workers in 2020 happened during protests.

We’ve developed a package of safety measures with security personnel and we’ve held talks with the police.

She said that not only the physical safety of journalists has to be guaranteed but also their psychological health. Besides leading the MDR ,Karola Wille is also Chair of the German committee of the International Press Institute IPI, a long-term partner of the ECPMF.

Lutz Kinkel remarked that in the Netherlands the situation has already escalated in an alarming way: Public service broadcaster NOS TV decided to take down the logos from vans and vehicles after the crews were brutally attacked. Stones were thrown at their branded cars, anti-lockdown protestors urinated on the vans and camera equipment was smashed  – to name only a few examples of the violence they face.

Yet Karola Wille also pointed out a positive development during the COVID-19 pandemic: according to a long-term study by researchers at the University of Mainz, public trust in the news services of public service broadcasters has increased by three percentage points between 2019 and 2020.

Obviously the situation in Germany is characterised by a paradox: while the majority seeks and relies on solid quality journalism provided by PSM and private media outlets, a smaller, but growing and loud minority protests violently against alleged misinformation by “mainstream media”. A central source for this rage is the wide spread of conspiracy stories. In Poland these conspiracy stories are partly disseminated by government-friendly media in order to attack oppositional opinions, Adriana Rozwadowska said.

To avoid polarisation and strengthen media freedom strong organisations and institutions are mandatory. Lutz Kinkel referred to ECPMF’s fact-finding mission to Scandinavia as evidence of this. In Denmark, for instance, more than 65 percent of all journalists are organised in the relevant union. Gazeta Wyborcza’s Adriana Rozwadowska, herself a union official,  strongly agreed that journalists’ unions can play an important role – except that in Poland they are politically polarised, with the largest association favouring the PiS government.

In Czechia the level of organisation is also rather low. But ECPMF’s Supervisory Board Chair Lucie Sykorova, who attended the campus talk, posted good news: recently two new associations have been founded to support independent journalists. One of them focuses especially on regional and local journalists – news deserts are expanding everywhere in Europe’s countryside.

Wrapping up the debate, moderator Lutz Kinkel had to conclude that it had made one thing clear:

We have a lot to do. Press freedom doesn’t just happen as a matter of course. We have to defend it, not just today, but every day.

The 2021 World Press Freedom Day Campus Talk was organised by the European Centre for Press and Media Freedom, the Media Foundation of the Sparkasse Leipzig, with support from the Saxonian Landeszentrale für Politische Bildung and hosted online by the Media Campus Villa Ida, Leipzig.