It’s a giant leap for whistleblowers! A EU directive now protects whistleblowers by making it legal for them to break news on wrongdoing directly to media outlets or regulators, before first having to check with their bosses.

On 12. March 2019, the European Parliament and European Union Member States reached a provisional agreement on how to protect whistleblowers. This agreement clarifies the directive first suggested by the European Commission in April 2018. This directive made the press and media freedom community quite nervous, as it would have forced whistleblowers to first report their evidence of wrongdoing internally within their organisations before taking them to third parties like the media or governmental authorities. 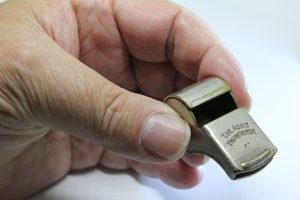 It doesn’t take a rocket scientist to know what the legal restrictions imposed by the original wording of the directive would have meant for potential whistleblowers. Many could have lost their jobs, be muffled, or worse, if they first had to report internally, before being able to take their evidence of wrongdoing to third parties. The ECPMF warned about the danger that such directive would have placed on whistleblowers and media freedom.

“We welcome the agreement between EU institutions reached late last night on the EU directive on protection of whistleblowers. This is a historic development as it is the first time the EU will oblige its Member States to put in place legislation to protect whistleblowers. Hopefully in the future, whistleblowers like Antoine Deltour (Luxembourg France), Maria Bamieh (Kosovo, the United Kingdom), Maria Efimova (Malta) will be protected instead of being prosecuted.”

In short, the new EU directive gives whistleblowers legal protection at the moment that they decide to blow the whistle, and don’t need any internal approval for doing so. Although some countries criticised the new directives, countries like Germany supported it.

This was an important victory for press and media freedom made possible by the multiple organisations that lobbied for the protection of whistleblowers at the EU level.

You can pat yourselves in the back, freedom of expression community, you deserve it!