Threats to journalists: The ’new normal’ in Germany

The first month of 2020 shows that journalists continue to face violent attacks against members of their profession. In January alone, media workers were attacked in five different incidents. None of these attacks occurred during a right-wing demonstration, unlike the majority of the attacks that have been registered since the monitoring began five years ago.

ECPMF has been systematically monitoring attacks on journalists since 2015. A clear picture emerges after five years: attacks on the press are now the new normal.

The 2019 results, on the other hand, confirm the findings from previous years – despite the lower number of cases. ECPMF has recorded 14 physical attacks on journalists last year. For comparison: in the previous year 2018, 26 violent attacks were verified.

In 2019, with the exception of three attacks, they all came from right-wing groups. This confirms the findings of the past four years: media professionals, journalists and reporters were still most at risk from right-wingers who despise the press. ECPMF is not aware of any attacks from the left in 2019.

There have always been attacks against journalists from the right of the political spectrum. This has changed over time since 2015: both the nature of the victims and the groups of perpetrators have expanded. Now there is a broad, heterogeneous mass that is hostile to the press. Working in journalism has become a risk for all media professionals – especially if they report on large right-wing demonstrations.

A look at the survey reveals a recurring pattern over the past five years. If, after five years of ECPMF verification and a three-digit number of registered crimes, you wanted to design a sample case to illustrate the most common characteristics of this type of crime, the following elements would be included: 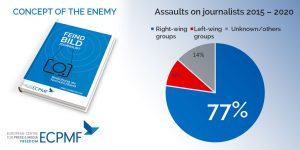 A male perpetrator who is taking part in a right-wing demonstration in Saxony attacks a journalist who is carrying a camera, shouts, insults and threatens him.

Although there are sequences of events that deviate from this pattern, those characteristics are most frequently observed, as the ECPMF study shows.

Ninety-two out of 119 attacks came from the right of the political spectrum. In sixteen cases the political alignment is ambiguous and eleven are left-wing attackers. Out of the total of 92 right-wing attacks, 79 took place on or near demonstrations. Political demonstrations by right-wingers are the most dangerous places for journalists in Germany. 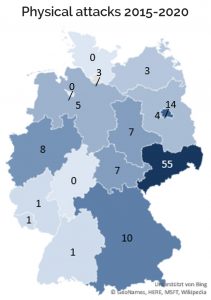 Saxony is still the root of the problem

There are two main types of attacks: some directed against the way the journalists do their job, such as taking pictures, and others against the work itself, that is, the way , in general, the profession of journalism is personified.

Media workers who have been attacked in recent years by those who oppose the press did not only suffer direct, physical violence.

READ THE GERMAN VERSION OF THIS ARTICLE HERE