Not just banter: Women journalists speak out against sexual harassment

“Sexual attacks against journalists have the effect of silencing the messenger and blocking the dissemination of news and information,” the Committee to Protect Journalists concluded in its 2011 report. Not much has changed since then; but more women are standing up for the right to do their jobs without being physically or verbally assaulted.

“I was 21 when I was interviewing a Canadian writer about an English-language writers’ club in Shanghai. It was my second article, and I was not a trained journalist. He was much older than me, but we were talking amicably, sitting in a bar on a warm summer evening.

Then he put his hand on my knee.

I could not shake it off surreptitiously, and our interview was not over yet. For the next five minutes, I continued asking questions about the club, and he went on stroking my knee. After our interview was over, he invited me to spend the night in his house.

I did not tell my editor about this episode, because I felt that sharing this would be ‘too much’. This was a common attitude among journalists in Moscow. We were supposed to simply shrug off all unwanted sexual advances. Eventually, one would build up the tolerance, and laugh at the more sinister episodes.”

This is what happened to Anastasia Karimova ‒ a popular blogger who used to work for the business daily Kommersant. When she went to South Ossetia to cover local elections, she and her colleague were offered a lift by two MPs to a dinner with the local government. In the car, the men started groping the two journalists. Neither of them told the story to their editors.

One year later, Anastasia went to another part of the Caucasus, Arkhyz ‒ and was stalked by a local businessman who misinterpreted her professional interest, and spent an entire night wreaking havoc on the cottage where Anastasia and her colleagues were staying. Eventually, he was kicked out, and she had to spend the night in a male colleague’s room.

When I asked Anastasia if she was affected by those attacks, she said they did not have any lasting effect ‒ she simply became more defensive and careful. Her colleagues’ help did not go further than defending her from the rogue businessman.

Our culture teaches women to accept sexual harassment as “a little banter”, and ignore the harmful influence that it can have on their working lives. For women working in journalism, sexual harassment is an additional complication they have to face in their workplace, on top of all the usual aggression journalists have to deal with. Sexual assault can have a profound impact on the work and life of a journalist, as one German journalist, Ms. Fischer (name changed) has discovered.

The European Centre for Press and Media Freedom is doing its part by raising awareness on gender-based threats and providing a safe channel for female journalists to denounce incidents. It has created the Women’s Reporting Point, working with the European Federation of Journalists (EFJ) and its Italian member union.

Via this specialised reporting point, victims of such attacks can confidentially and anonymously contact the ECPMF’s female staff, report threats and, if wanted, ask for support. Even if no help is requested, the cases will be monitored and analysed to get a more concrete overview of gender-based threats to journalists in Europe.

Reporting against all fears and obstacles

A few summers ago, Ms. Fischer was on assignment in the Middle East, working on her final university project. She was writing about a local ethnic group, and had to spend many days in their camp, where she was feeling quite comfortable, having shared food and spent much time with its inhabitants. On her last day in the camp, when her photographer, translator, and the protagonist of the story walked out of a tent she was in, she found herself alone with a man she had never met.

The moment they were left alone, the stranger assaulted the journalist, grabbing her from behind. After fighting him off, she left the camp. She was too shaken to finish her story that day, and only wanted to leave the country. It was with the help of a senior colleague that she managed to calm down enough to go to the camp one more time to get the last quotes and pictures.

Ms. Fischer was determined to report her story. This was when she met her first unexpected hurdle.

The first organisation she contacted was Reporters Without Borders (RSF), and they could not help her in any way, because sexual violence was outside of their field. Today, RSF does not publish any general reports or surveys covering sexual violence against journalists, but does cover individual instances of it.

The next organisation she contacted, Committee to Protect Journalists (CPJ) was very supportive, and kept the record of her assault. But what upset Ms. Fischer most was the reluctance of her faculty, and the organisation that sent her to write that story, to acknowledge her trauma, and to change their attitude towards the risk their journalists faced.

They did not provide any security training to journalists before, and did not want to do it after the attack on Ms. Fischer. They also did not offer her any formal apology or help. On the contrary, they suggested that she should not continue working on her story, because she was too biased.

Additional hurdles in a male-dominated profession

The attitude that Ms. Fischer met with from her teachers is widespread, and is often the reason why many journalists do not share their stories of sexual assault. Female journalists who have been attacked often keep their stories quiet – also out of fear that they will no longer be given the assignments they want.

This was a common reaction to the rape of Lara Logan on Tahrir Square in 2011. The attack on Lara Logan triggered such an outcry that RSF published a recommendation for the media not to send their female journalists to cover potentially dangerous events (now removed). This warning was met with outrage by many journalists, who saw this as an infringement of their freedom and an additional hurdle in a male-dominated profession.

As mentioned before, the CPJ report from 2011, which came out in the wake of the attack on Lara Logan, names sexual assault as an instrument used by those who want to silence journalists. The story of the Colombian journalist Jineth Bodoya Lima, who was kidnapped and violently raped in 2000 when investigating an illegal arms trafficking ring, is an example of this. Her attackers knew of the stigmatising nature of sexual assault, and counted on the journalist to keep it a secret.

Most of it is left alone

To this day, female journalists are reluctant to report the sexual harassment they face at work: According to the Italian Journalists’ Association, they have not received a single report of sexual harassment from their colleagues, even though it is well-documented by “Olga Ricci” in the book Il Porco Al Lavoro(“Get your hands off me”) that came out in 2015. When it comes to reporting sexual harassment at work, some women are afraid of being fired, or facing retaliation.

There is no reliable data on the scale of sexual harassment against women in journalism. But according to a survey conducted in 2014 by the International Women’s Media Foundation (IWMF), 47,9% of female journalists have experienced some kind of sexual harassment at work. To this day, reporting sexual assault is often riskier than keeping it secret, because the legislation in many countries ‒ including Western Europe ‒ still does not provide adequate protection against workplace harassment.

More often than not, survivors of sexual assault are left to deal with their trauma alone. This was what happened to Ms. Fischer who, after returning from her trip, started working for a well-known Berlin daily and suffered from psychological and physical consequences for months.

With the ever-growing importance of online media and social networks, sexual harassment against women journalists has also entered this sphere. The inhibition level for offenders is lower because of a lack of physical proximity – but the psychological consequences for victims are real, even though the threats are digital. Luckily, more and more organisations are acknowledging the threats and dangerous consequences of online sexual harassment and gender-based violence.

For example, with the #FEMjournosafe campaign, the OSCE Representative on Freedom of the Media makes special efforts to protect female media workers from the special threats they have to face. This means finally giving a helping hand to those who had to deal with this burden in secrecy for too long.

Daria Sukharchuk is a Berlin-based freelancer. Some female journalists talked publicly about their traumatic experiences for the first time with her, and she agreed to share her insights with the ECPMF. 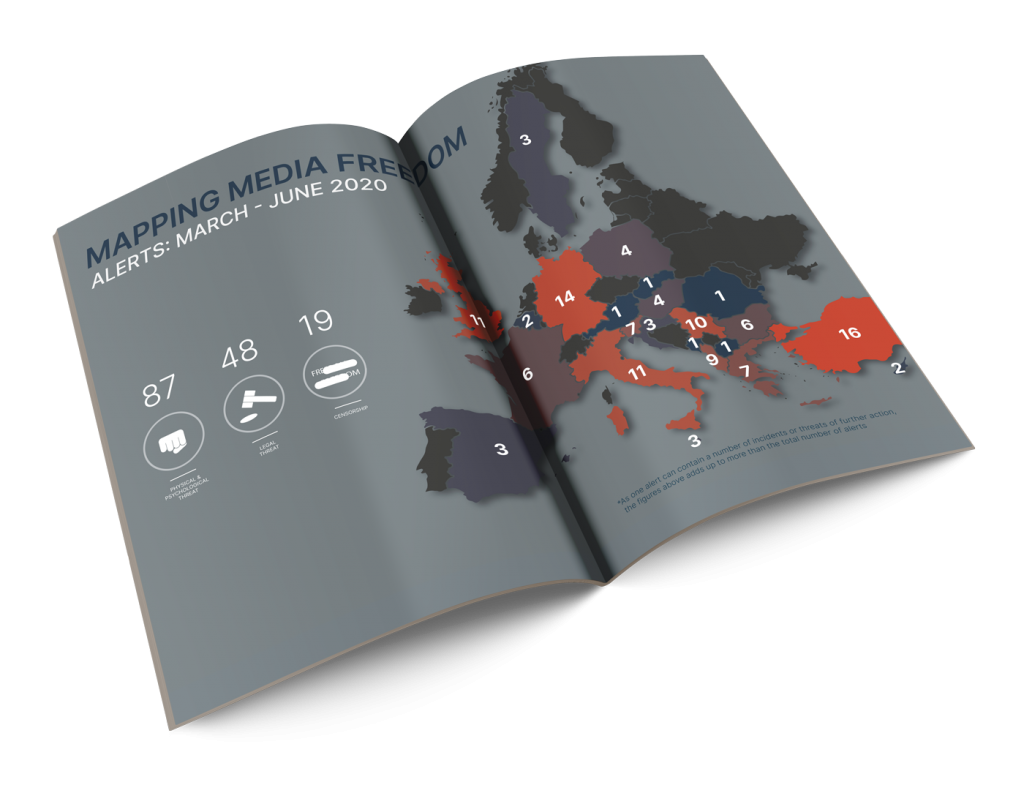