Austria’s media freedom is under threat. Over the last two years, the policies of the previous government showed that the current media system can be influenced politically. In its first year under the government of Sebastian Kurz, Austria fell five places on the international press freedom ranking of Reporters Without Borders, to 16th place. According to a survey, nearly half of Austria’s journalists feel that media freedom is in a precarious state. Harassment and threats against journalists, both online and offline, also reached a new level under Kurz’s government. In addition, restrictions on journalistic access to information related to the government’s work gives cause for concern about the situation of media freedom and the free flow of information in Austria.

This concern prompted an international delegation of media freedom and journalist organisations to review the situation on the ground. The European Centre for Press and Media Freedom (ECPMF), Reporters without Borders Austria, the International Press Institute (IPI) and the European Federation of Journalists (EFJ) met well-known journalists from public, national and regional media, representatives of the ORF public broadcaster as well as the media policy spokespersons of several major parties. A discussion with the Austrian People’s Party (ÖVP) and the Freedom Party (FPÖ) did not take place.

Based on the discussions and insights we address the following joint calls to the upcoming ÖVP-led government:

Call 1: Secure the independence of the public service broadcaster (ORF)

We call for a reform of the ORF law to strengthen the ORF and make it sustainable for the future.

Political influence on the ORF must be ended and prevented. The close structural links between politics and the public broadcaster must be broken. Leading positions in the broadcaster must be filled according to professional and not political criteria. The Foundation Board must be staffed according to expertise and a majority of its members must be independent of political parties. The Foundation Board should also take into account and reflect civil society. Members of the ORF Foundation Board must be able to be removed if they attack ORF journalists for political reasons.

The independent financing of ORF must be ensured, for example through a license fee charged to households. Under no circumstances should the ORF’s budget be covered by the Ministry of Finance of any government. The switch to state budget financing bears the risk of political influence – ORF could in the long term become a state media outlet instead of a public one. The funding must be sufficient to meet the programme mandate. Employees’ rights must be safeguarded.

We observe a change in the political climate, not only in Austria. There are increasing attempts to intimidate journalists amid a political culture of editorial interference, for example through strategic threats of lawsuits or the use of anti-media rhetoric. Policy makers should restrain from hostility (online, offline, verbal, physical) towards journalists. Hostility, attacks and defamation against journalists must be consistently condemned and pursued by every federal government and leaders of political parties.

Call 3: Introduce a Freedom of Information Act in line with international standards

Austria is one of the worst countries in the EU when it comes to freedom of information and transparency legislation. The planned Freedom of Information Act must meet international standards and must be accompanied by the political will to implement it in practice. The doctrine of “official secrecy” (“Amtsgeheimnis”) still in force under Art. 46 of the Civil Service and Employment Law Act (Beamten- und Dienstrechtsgesetz) has long since exhausted its purpose as a reason for denying information that is in the public interest.

The relationship between political PR and political reporting must not become unbalanced. Instead of increased PR activity on the part of the political parties, we demand free journalistic access to information on government and parliamentary work and an open, transparent communication policy to promote democratic discourse.

Call 5: Media diversity must be strengthened

Media diversity must be promoted and the appropriate environment for it must be guaranteed.

The use of public money for advertising must be restricted so that it cannot be used as an instrument for informal media support, political favours, intimidation or media censorship.

The existing rules on public financial support to the press must be reformed in order to promote pluralistic and independent journalism. This must apply to all sectors of the media.

We call on all parties and the future federal government to take a clear stand for media freedom and to acknowledge it as a priority. 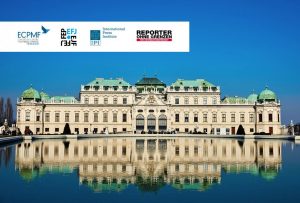 International media freedom and journalists organisations warn that while significant progress has been made in Kosovo, toxic rhetoric and smear campaigns against media, underfunding of public broadcaster and lack of transparency risk undermining the progress.