Journalist Afgan Mukhtarli in court amid concerns for human rights

On 14 December, the trial of journalist Afgan Mukhtarli continued at the Balakan District Court. In May this year, Mukhtarli had mysteriously disappeared from Georgia, where he was living, and later resurfaced in Baku – under arrest. The journalist says he was abducted, tortured, and forcefully brought to Azerbaijan, with 10,000 Euro planted in his pockets. 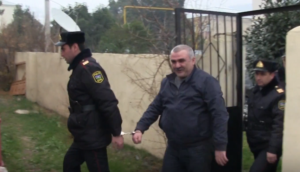 The Azerbaijani government accuses him under Article 315.2 of the Criminal Code, resisting a government representative or using force against them. In addition, he was charged under Articles 318.1 and 206.1, which concern illegal border crossing and smuggling. International human rights organisations have campaigned for Afgan Mukhtarli’s release.

No reporters or media allowed into court

Reporters who arrived to cover the trial were denied entry. The defendant’s side criticized this as a violation of the open trial format, but judge Humbat Salimov ignored the objections.

Meydan TV spoke to lawyer Elchin Sadigov, who reported that before the hearing started, Mukharli’s defense lawyers once more requested that he would be allowed to leave the courtroom cage and sit next to them. Even though the same request had been approved during the previous hearing on 30 November, their motion was denied.

Afterwards, a motion filed by Sadigov, in which he requested that documents concerning Mukhtarli’s presumption of innocence should be attached to the materials of the case, was discussed and approved. The motion concerned a statement issued by the State Border Service and the Prosecutor General’s Office immediately after Mukhtarli got arrested. It claims that he got detained while trying to cross the border illegally, and that money was found on him. The defense lawyer criticized that issuing this statement would violate Mukhtarli’s right to presumption of innocence.

After public prosecutor Gurbat Mammadov announced the charges, Mukhtarli had the chance to speak. He explained that he was abducted in Georgia and brought to Azerbaijan, emphasizing that he experienced torture:

“I was arrested for writing investigative reports about businesses owned by the president’s family. Ilham Aliyev personally ordered my arrest.”

Journalist abducted as he walked home

This is how Mukhtarli described the day he was arrested:

“As I walked towards my home, three people in plain clothes approached me. When they tried to push me into their car, I resisted. They beat me as they put me in the car. When the car left [Tbilisi], they put a sack over my head. After driving for a while, they stopped and removed the sack. I thought they were going to kill me. At that moment, I recalled [murdered journalists] Rasim [Aliyev] and Rafig Taghi. That’s why I said to them, please, do not kill me with a knife, kill me with a bullet. They said, don’t worry, we’re not going to do anything to you. Then, they put the sack back over my head, taped my mouth, and drove for a little more. At one point, we changed cars. From an Azerbaijani song that was playing in that car, I understood that I was in Azerbaijan now. As we traveled, one of the people in the car called someone to say, ‘Mr General, we have brought the mullah and are heading to the wake.’ After driving for a little while, they got me out of the car, put me in some place, and removed the sack from my head. I understood from the room I was in, that they had brought me to a military base. From there, they brought me to Baku.”

Elchin Sadigov said that four further witnesses and an alleged victim were heard:

“The conflicting testimonies of the victim and witnesses prove that this criminal case is obviously fraudulent. In addition, while the trial was going on, the door was left open and the witnesses could hear what was happening in the courtroom. Our objection to this was only accepted when just one witness was speaking. Afgan said that those statements were lies and called on them to tell the truth.”

After a break, the judge announced that the trial would be postponed until 10.30 on 28 December.

This court report from a correspondent in Balakan was orginally published by Meydan TV and we re-publish it with thanks to them.