Politicians in the European and British parliament are publicly calling for fair treatment of the Azerbaijani journalist Afgan Mukhtarli, who was abducted in Georgia and is facing trial in Azerbaijan. 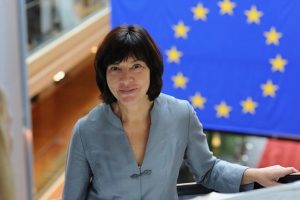 Speaking to ECPMF from the European Parliament, Rebecca Harms MEP told ECPMF of her concerns. She said it is worrying that Afgan Mukhtarli’s lawyers are not being given proper facilities.

“I have been told that they could not have private confidential conversations. It has been reported that the notes one of the lawyers took in a meeting with Afgan have been read by employees of the prison when he left. Furthermore, it is not acceptable that family members could not visit him in the way it should usually be possible under the law.“

Ms Harms has travelled to Georgia, and spoke to Afgan Mukhtarli’s family as well as the authorities in the capital Tblisi.

They also raised fears about the health of the imprisoned journalist, who had moved to Georgia in the hope of finding a place where it would be easier to work as a critical investigative report.

The MEP says he has serious medical problems: “I learned this during my visit to Georgia when I started to try to understand the case at the beginning of his detention. His wife told me that he is suffering from diabetes and he also has pains around his heart and problems with his blood pressure“.

And as the talks continue about closer economic and political ties between the European Union, Azerbaijan and Georgia following the Eastern Partnership Summit in Brussels in November 2017, Ms Harms believes this case and other human rights concerns must remain on the agenda:

„In the relations with Azerbaijan and Georgia like with all other Eastern Partnership countries, human rights must be and are an important issue. The case of Afgan Mukhtarli is a sad example for the urgency of the matter.“

Meanwhile in London, a cross-party group of fourteen MPs is calling on the Foreign Secretary Boris Johnson to note that Azerbaijan is a signatory to the European Convention on Human Rights. In an Early Day Motion, they ask him to: “Advise the Azerbaijani Government that the role of journalism should be respected and that fears of reports of wrongdoing within government should not lead to persecution of the messengers.“

Support is building for the motion, which was initiatied by the former Conservative Cabinet Minister Sir Peter Bottomley.

The partners in the Media Freedom Rapid Response (MFRR) and other undersigned press freedom organisations welcome the publication of the letter from the Dutch Government to the Parliament regarding a proposed policy approach on media freedom and safety of journalists.