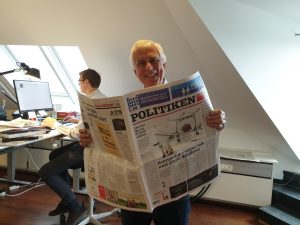 This World Press Freedom Day is even more difficult than usual for media outlets and journalists. Struggling with loss of income because of the lockdown to prevent COVID-19 infection and with repressive new laws and decrees, they have little to celebrate. Or so it seems. Yet one country is leading the way to a stable future for quality journalism and media plurality – even in these circumstances. Henrik Kaufholz reports from Denmark:

National TV, national newspapers and internet media have more users than ever, but revenue from advertising almost disappeared overnight. Now the state is jumping in with subsidies. After a few days of controversial negotiations in the Ministry of Culture the deal was done: on 1 April, the Danish media got a survival kit.

The support came at a point when Denmark had been closed down for three weeks due to the COVID19 crisis and the government had announced it would spend nearly 400 billion, Danish crowns (DKK) to support almost every other kind of industry. The Danish Minister of Culture, Joy Mogensen, a former mayor of Roskilde, is certainly not a political heavyweight, but it’s hard to understand why it took her so long to mobilise support for the media industry. It was common knowledge that this aid is badly needed.
A basic element in the current subsidies for the economy is funding the salaries of staff who have less or nothing to do at their workplace and other costs like insurance and rent. The government with the support of all parties in parliament (Folketinget) wanted to bring Danish enterprises – large as well as small – safely through the crisis. “No upper limit”, declared the Minister of Finance, Nicolai Wammen.

The situation in the media industry is somewhat different. Both the publishers (Danske Medier) and the journalists (Dansk Journalistforbund) argued that the main purpose of the media is to inform the public. This is needed very much more in a crisis than in ‘normal times’. The media should not cut down their activities but continue to work at full speed. The money is needed to keep the machine running and not to finance a pause.

The survival kit, which includes start-ups and new, smaller, internet-based media is composed of two provisions.
One is to pay all the media subsidies already foreseen for this fiscal year at once. This means that the media got 368,1 million DKK in April and not just the usual monthly payment of 119,4 million DKK. This will give them extra cash in the crisis. But it’s ‘old money’ which they would have received anyway and it only improves the cash-flow. So, the industry was not happy at all.

The other lifebuoy came after public criticism. It gives compensation for revenue from advertising, which more or less disappeared overnight. Media outlets which have lost between 30 to 50 percent of income from advertising will get 60 percent of the amount compensated by the state. If the drop in revenue is between 50 and 100 percent they will get 80 percent compensated. This measure covers the period between 9 March and 8 June 2020. For this period, the media will get a total of 180 million DKK.

As with other state support for Danish economy the media subsidy will probably be extended even if the government starts lifting the COVID-restrictions immediately after the Easter holidays. If the support is not extended, several local media outlets will most probably have to close.

All this happens in an environment where the two national public service TV stations are watched by 71 percent of all viewers – an upwards trend – and where national newspapers are getting new subscribers in the thousands for the web-editions and new readers in the hundreds for their print-editions.
The Danes also read main news portals more often and for longer than usual. This goes for free as well as paid-for sites. They want reliable information and not fake news. However, these increases in attention and subscriptions cannot compensate for the loss of advertisement revenue.

Fundamental crisis is still there

The big question is of course what’s going to happen after the COVID-19-crisis. The survival kit will preserve the old media structure for a time, but advertising in print-media – which only fell slightly in 2019 – will probably not come back.
Some estimates are that only 20-30 percent of advertising for private consumption will come back. And many regional news organisations are already in the red.

When the COVID-19-crisis surprised the world, in Denmark there was talk of drafting a new media policy. The ruling party, the Social democrats, seems less eager for a new approach to the state support for Danish media than other parties in the governing coalition, but the COVID-crisis shows that this is needed.

Danes like other West Europeans are spending more money than ever on their media consumption, but they are changing the way they use it. A new approach to state support for the media should take that into account – and put more money into innovation and new media, rather than propping up the “dead tree” – printed press.

To give you a glimpse of what to expect, this article on Denmark, offers an overview of media developments during Covid-19. Denmark ranks amongst countries with the highest amount of press freedom in the world on RSF’s World Press Freedom Index 2020.
The report will contain more inspirations and approaches from Denmark and Sweden.

MFRR to host press freedom mission to the Netherlands