At the Balakan District Court, Afgan Mukhtarli’s trial on 28 December started with a scandal. Court officials blocked journalists from filming outside, and then prohibited them from entering the courtroom. People who were allowed in to the courtroom had their names recorded. 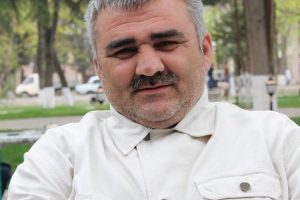 Afgan Mukhtarli and his defence lawyers criticised judge Hakim Humbat Salimov for not allowing journalists into the courtroom: “Journalists are left out because they woud rather let police and people who are irrelevant to the trial into the courtroom.”

“I have seven to eight years ahead of me”

The judge dismissed Mukhtarli’s objection and told him to be quiet, stating they did not have time for such an argument. Mukhtarli responded: “I am prepared for any argument, I have seven or eight years ahead of me.“

Defence lawyer Nemat Karimli further objected to the procedure of recording the names of those allowed into the courtroom: “This is being done in order to create problems for these people.” The judge said that it was only a formality and could not be seen as a way of exerting pressure.

The court first heard witness Murad Gasimov, 35, who lives in the Jalilabad District and is the Border Service Troops’ deputy head of the Balakan border post. On the day of the incident, he had been on duty about 5 km away and was notified that a person had been caught while trying to cross the border.

“When I arrived, I saw Afgan Mukhtarli being questioned in the office of the deputy morale officer. There was money on the table. I have forgotten now whether it was dollars or euros but I think it was euros. Afgan would not sign an explanation. I asked him why he had been detained, but he did not answer. I got him water and cigarettes.”

Questioned by defence lawyer Nemat Karimli, Gasimov replied with “I do not remember.” He said he did not see any money retrieved from Mukhtarli’s pockets when the journalist was detained, stating he heard about the amount of money on the table from another person, Maj Adil Orujov. Gasimov further said that he saw a large “€” sign on the money, which is how he knew it was euros.

Afgan Mukhtarli accused the witness of lying and explained that the interrogation had taken place in another room. Defence lawyer Nemat Karimli requested the testimony given by Gasimov to be removed from the list of evidence. He argued that someone who did not take part in the detention of the journalist, and did not see money retrieved from his pocket, could not be accepted as a witness.

His petition was rejected. “Murad Gasimov saw the money. Therefore, the petition will not be allowed,” the judge said.

When interrogated by defence lawyer Elchin Sadigov, Gasimov said he did not see any traces of violence on Afgan Mukhtarli’s body.

The journalist said that Azer Shirinov, deputy chief of the State Border Service, was the person who uttered the words “We have brought the mullah” when he was transferred over the border after having been abducted in Georgia, and that Shirinov was the person who later removed the blindfold from his eyes at the border post.

Nemat Karimli requested that the witness, who said “I do not remember” in reply to questions, be subjected to an expert examination. This petition was rejected as well.

“After all, I am not supposed to see everything”

Defence lawyer Elchin Sadigov asked another witness, Gafur Mammadov, who is also a victim in this case, whether he had seen if Mukhtarli had been hurt. Mammadov confirmed that his nose was injured. Gasimov, however, said he did not see that the journalist had been injured: “After all, I am not supposed to see everything. I did not see it.”

“I have seen euros on the internet”

Afterwards, Azer Bayramli, who had served as a soldier at the border post, testified as a witness. He said that at about 12:00 pm, his commanders stopped him when he was walking to the bathroom and offered him to be a witness in the case. He explained that he had entered the room together with Adil Orujov, and that Afgan Mukhtarli had been alone:

“We went into the lounge. Afgan was alone. Twenty 500-euro bills, plastic cards and several coins were found on him.” The witness said he did not see any traces of injuries on Mukhtarli.

When asked by defence lawyer Elchin Sadigov whether he has seen euros before, Bayramli replied: “I have seen them on the internet.”

Witness Dovlet Haji Khanputayev was next to testify. Khanputayev, who is a technical driver at Balakan border post, said that he went to the scene of the incident when an alarm went off at the border:

“We saw one person crossing the border illegally. We disguised ourselves and waited. When he came closer, we stopped him. He hit Gafur Mammadov with his fist, who fell to the ground.”

The witness said that they captured Afgan Mukhtarli and handed him over, and that they were not present when he was searched. When answering questions asked by the defence lawyer, the witness confirmed that he had seen Azer Shirinov and Jeyhun Gulamov at the scene of the operation.

Nemat Karimli inquired: “If you are a technical driver, why did you go to the scene of the incident when the alarm went off?” The witness replied that he went there because he was afraid of driving.

Khanputayev further said that even though he has been in service for eight years, it was during the operation that he saw the border service chief’s deputies Azer Shirinov and Jeyhun Gulamov for the first time.

Afgan Mukhtarli requested to launch a criminal case against Azer Shirinov under Article 144.2.3 of the Criminal Code – premeditated abduction by a group of people or by an organised group.

“Azer Shirinov played a role in my abduction. He is the person who removed the blindfold from my eyes, planted the money in my pocket, used foul language. I want this person to be prosecuted for abduction.”

The prosecutor said that he could not accept the request because there was no evidence to support what the journalist said. The request was rejected.

The trial continues on 5 January.

Investigative journalist Afgan Mukhtarli, who lived in Georgia on a residence permit, was arrested in Azerbaijan on 29 May 2017. He says he was detained in Tbilisi, tortured, brought by force to the border and handed over to Azerbaijan. In addition, 10,000 euros in cash were planted in his pocket.

The government of Azerbaijan accuses the journalist of using force against a government representative, endangering their life and health in the line of duty (Article 315.2 of the Criminal Code). He faces up to three years in prison. In addition, he is charged under Article 318.1 – crossing the state border without having relevant documents or crossing the state border bypassing checkpoints, and Article 206.1 – smuggling. Under Article 318.1, he faces a fine up to 3,000 manats or imprisonment for up to two years. Under Article 206.1, he faces up to five years in prison.

International human rights organisations have named him a political prisoner.

This article was first published by Meydan TV and is re-published with their permission.