Hosted on Zoom for interactive participation, and simultaneously livestreamed on the MFRR YouTube channel, the conference will play host to a range of panel discussions, live interviews, and keynote speeches with journalists, media freedom experts, policy-makers, and other stakeholders all working to defend press freedom. The Summit will also feature the award ceremony for the 2023 IJ4EU Impact Award for cross-border investigative journalism.

Take a look at the daily breakdown below:

Journalist safety in Europe was thrown into the spotlight in 2022 following Russia’s invasion of Ukraine, with dozens of journalists killed since 24 February. Outside of Ukraine, Europe remains an increasingly hostile environment for journalists to report from. From online attacks to physical violence, Day 1 of the Summit will highlight threats to journalists in EU member states and candidate countries, sparking conversations on initiatives to support journalists in exile, reporting from a conflict zone, surveillance and spyware, and harassment in the newsroom.

Across Europe we regularly see powerful entities abusing legal systems to stifle and smother critical reporting. Strategic litigation poses a major threat to independent media across the continent, in particular in countries where rule of law is weakest and vulnerable to abuse. So far, the MFRR monitoring partners have recorded a total of 113 SLAPPs on Mapping Media Freedom since 2014 – highlighting the ever-present threat this issue poses to press freedom. Day 2 of the Summit will shine a spotlight on these topics as experts discuss initiatives to counter SLAPPs, impunity for crimes against journalists, and disinformation laws.

From Hungary and Poland to the Czech Republic and Slovenia, Europe – in particular central Europe – has become a hotbed for state capture of media. The panels on day 3 will look into the crisis of political exploitation of the media through the abuse of state economic and regulatory levers. It will examine issues around media pluralism, ownership transparency and the abuse of state budgets to fund clientelist media in illiberal democracies. It will also debate whether the EU’s Media Freedom Act can provide the tools to prevent the march towards politically captured media.

In the coming weeks we will be sharing more information about the conference but for now we encourage you to save the date. Keep an eye on the MFRR newsletter, Twitter, and website for all the latest updates! 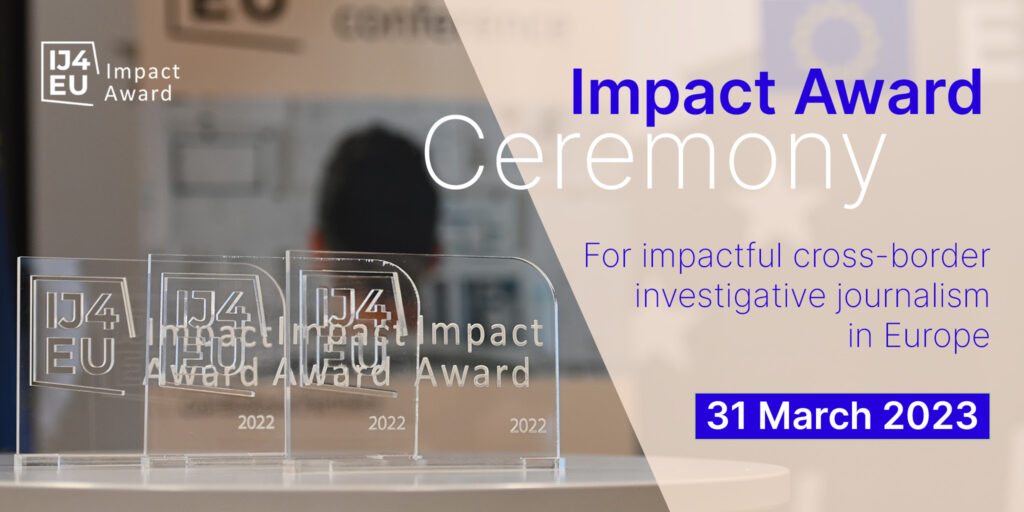 The final day of the Summit will close with the 2023 IJ4EU Impact Award Ceremony. Celebrating excellence in cross-border investigative journalism in Europe, the IJ4EU Impact Award is given annually to three teams of European cross-border investigative journalists. The ceremony will take place on the evening of 31 March in Leipzig, Germany, and also streamed online.

Read more about the IJ4EU funds and Impact Award here.