Reporter Afgan Mukhtarli has made a defiant speech in court, claiming he is being punished as “revenge“ for his investigations of alleged corruption involving Azerbaijan’s ruling family, the Aliyevs. 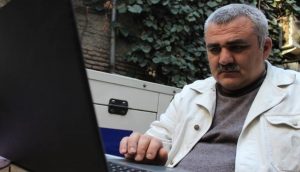 The exiled journalist was abducted from his place of exile in Georgia, gagged and blindfolded with a bag over his head and driven to Azerbaijan where he is in pre-trial detention. At the hearing to decide whether his detention should be ended or extended, Mukhtarli came out fighting: “I have been struggling against the Aliyevs’ lawlessness since 1993. I have written investigations exposing crruption and busines ties of the ruling family of Azerbaijan.“

These investigations have been published on Meydan TV, the independent TV news channel based in Berlin, Germany.

Mukhtarli told the court: “Since the Azerbaijani authorities’ hands don’t reach them, I have been put under arrest. They decided to take revenge on me for my collaboration with Meydan TV“.

In a courageous statement of intent, Afgan Mukhtarli ended his speech with this promise:

“We have always struggled to build a free and democratic society in Azerbaijan. The aim was our struggle was not that of the Aliyevs: to build an ugly regime through the support of some civil servants, prosecutors and investigators. We will continue our struggle and overcome, even if you increase your oppressions against us“.

The Nasimi district court extended Mukhtarli’s pre-trial detention by a further two months. He is charged with illegally crossing the border between Georgia and Azerbaijan, smuggling 10,000 euros in cash and resisting arrest.

The circumstances of the journalist’s abduction in May 2017 from the Georgian capital Tblisi are being investigated by the Georgian Interior Ministry. In July it was announced that the head of the border police and the director of the counterintelligence department are relieved of their duties until the end of the investigation.

Meanwhile Afgan Mukhtarli’s wife, journalist Leyla Mustafayeva, has launched a criminal complaint alleging he has been illegally deprived of his freedom. Neither Afgan Mukhtarli nor his family members have yet been granted victim status.